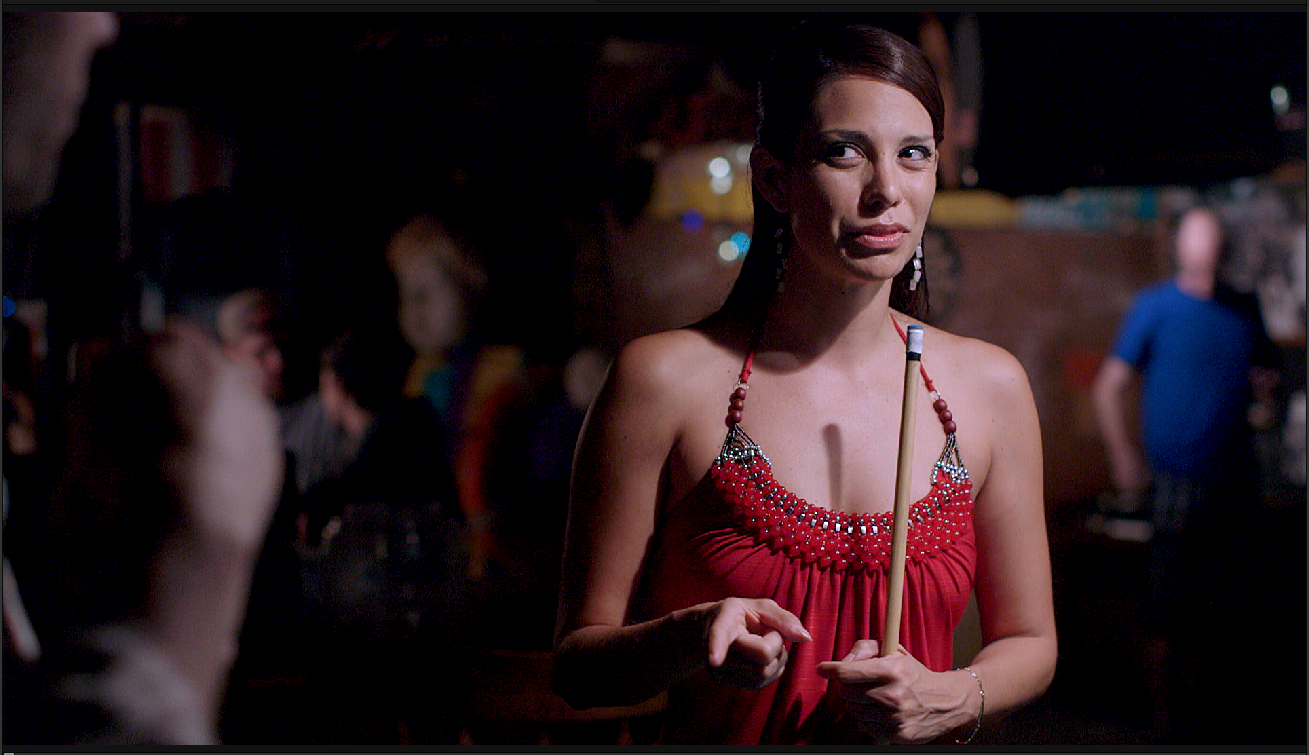 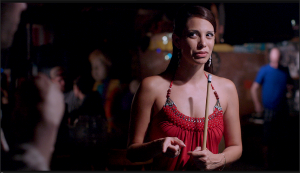 I want to highlight a couple of films I’ve worked on this fall. Both were submitted to Sundance and will be submitted to SXSW. I’m going to start with The Historian. A follow-up blog will cover Helen Alone. Each film has its own challenges and unique learning experiences. Though I had worked with Log files in the past, The Historian had its own set of issues that needed specific attention. 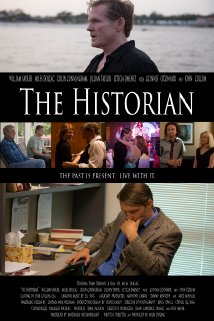 The Historian is a character-driven, human and humane drama, reminiscent of Wonderboys, Dead Poet’s Society, and Good Will Hunting.  It comments on the current malaise in higher education and warns of consequences for those who ignore or forget the lessons of the past. The film boasts a career performance by William Sadler (The Shawshank Redemption, Iron Man 3, Onion News Empire), a heartbreaking turn by veteran of stage and screen John Cullum (Northern Exposure), and a liberal dose of comic relief from Colin Cunningham (John Pope on TNT’s hit Falling Skies). The film is written and directed by an actual University Professor, Miles Doleac, who hopes he hasn’t lost his wry, observational sense of humor and historical perspective.

The Historian was shot on a Canon C-300 with C-Log to provide a wider dynamic range for luminance (more detail in the highlights).  On the surface it sounds easy enough to grade: Just create a three-node structure in Resolve with the C-log LUT in the middle, apply and adjust as needed. I found a 1D to Rec.709 and a 3D to Rec.709 for the Canon camera but they had identical effects from what I could tell. I experimented with a number of other LUTs, including a couple of custom ones from the Alexa website, but the time schedule for color grading was quite short so I had to make a decision and move forward with the grading process.

As I work more and more with Log-based files on color grading projects, I’m seeing there is as much frustration as there is magic and mystery.  A significant testing time is required on every scene to see if the C-Log LUT is going to work or not.  I can see the value now of having a colorist involved with dailies during the shooting of a film to test out the lighting on each set. If a LUT is required to reverse the Log-based files being used, then knowing how that will actually look during the shoot could be a lifesaver. Specifically, the LUT might work great outdoors, but indoors it might create unpredictable results, depending on the lighting and practicals in the  scene.

Unaltered C-Log images can have a flat appearance, so you don’t really know what you’re going to see until you apply a LUT or a grade with whatever combination of nodes or layers you use. For The Historian I used the C-Log LUT on 60% of the clips, and on 40% I built up my own node structure that essentially did the same thing but was easier to make color correction and then grade adjustments to fit the intent of the scene.  I was surprised how often only a single node was needed.   This reinforced a cardinal rule I try to follow: Simple is always better. If a node structure is getting complicated, start over and look for a more simplified solution (if possible). The point here is that just downloading and applying the C-Log LUT to your C-300 clips is hardly as simple as it appears on a long-form narrative. I’ve heard this from  long-time senior colorists in the past, so it wasn’t a complete surprise.

The Historian had about 1100 clips.  Although the lighting appeared to be well controlled in the scenes for the most part, the application of the C-Log LUT from Canon seemed to produce unpredictable results, as I said. For example, practical lights in a scene often caused the C-Log LUT to blow everything way out all around the light source. So much so that at times I would start over repeatedly with different approaches to tame the highlights so the mids stayed balanced in the scenes with the shadows.

Here are a few examples: 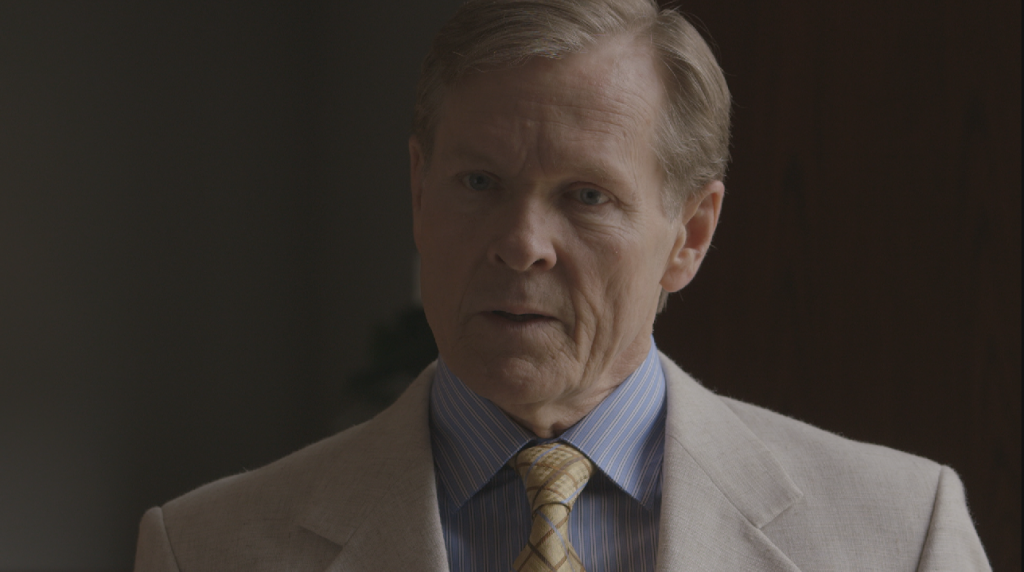 C-Log with no correction or grade. 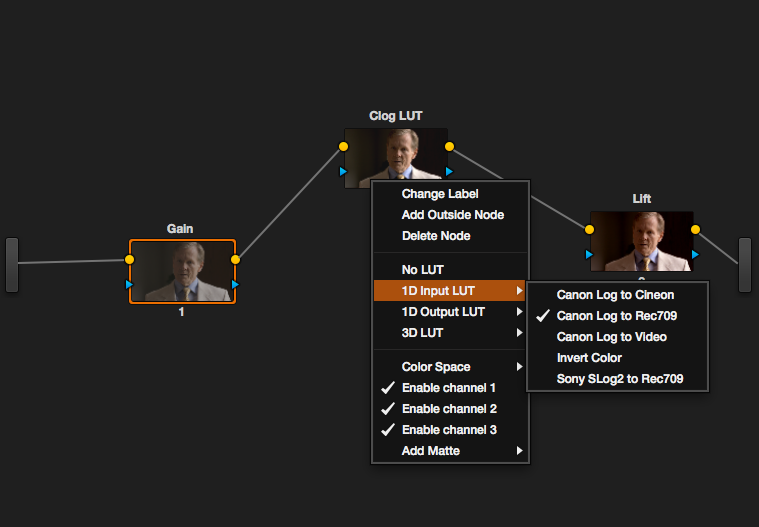 Three node structure. Experiment to see if the left node works best in adjusting lift or gain and visa versa on the right node. Sometimes it will change with different scene lighting.

In many cases it made more sense to assign the first node to adjust the highlights and the last node to adjust the lift. After you make the middle node the Clog LUT it’s best to get your scopes up and adjust the Offset control (on the first and last node) to move the RGB waveforms  up and down in the RGB viewer to get a feel for the total range of luminosity that was captured in the C-Log format – meaning there is more there than you might know until you make a big offset to test it. It can often be jammed way off either end, so pull the Offset adjust radically up and down to see what kind of adjustment you can make. Then start adjusting the  far left node for the highlights and the far right for lift. That’s not a hard-and-fast rule, but it did seem to work often.  Pay attention to your scopes and to the result on the viewer. Don’t just assume the C-Log LUT is going to provide you a simple solution. That may sound like a broken record, but you’ll be less frustrated if you think of the C-Log LUT as a starting point and are willing to toss it out when it doesn’t work. 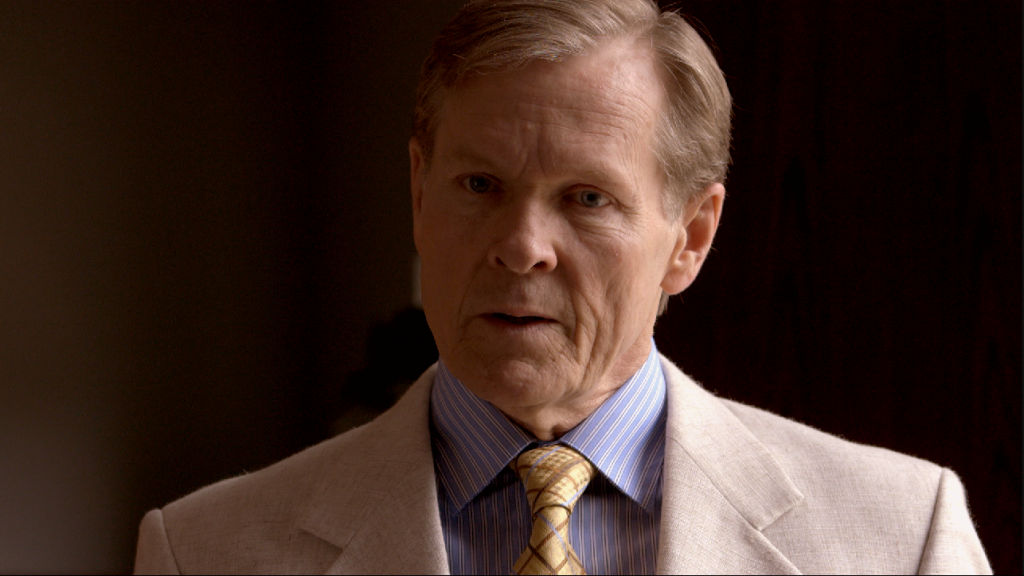 Note: If you’re seeing a strong red tinge in his face (above) then your monitor is off.  There is a very very slight red tinge applied to the highlights but again if it’s extremely noticeable that means your monitor needs calibration most likely.  I just noticed the over-emphasis of red on a monitor I have that has NOT been calibrated, but when I moved it back to my iMac, which is calibrated, the image looks just like it does on the Flanders reference monitor.  Ha, back to display calibration issues again but that’s not the purpose of this post. See my other articles on SpectraCal to solve this issue using SpectraCal’s CalMAN RGB. Anyway, this clip played well with the Canon C-Log LUT and a standard three node structure I mentioned above. Let’s move on to something that only required a single node even though it included a grade for the scene. 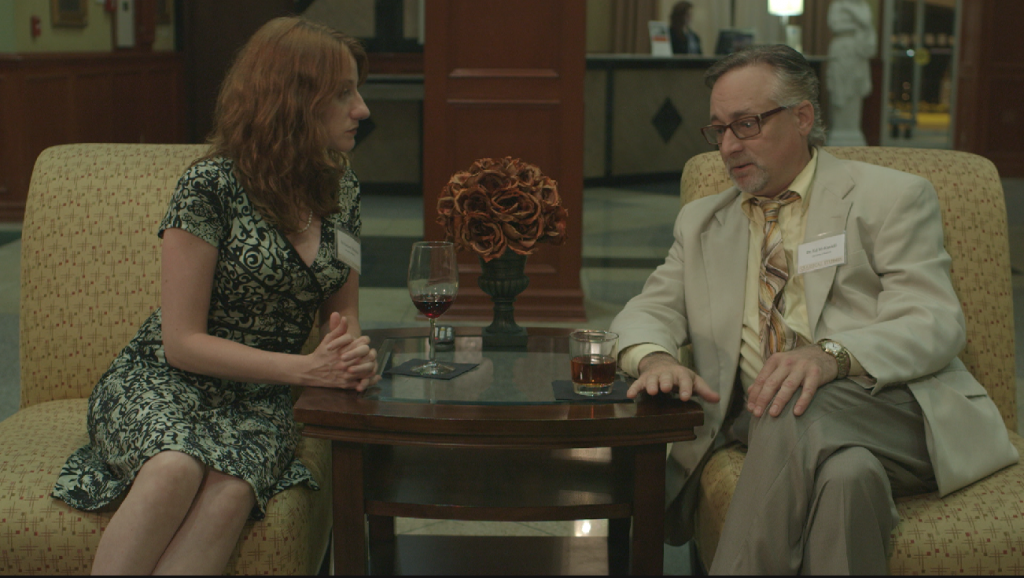 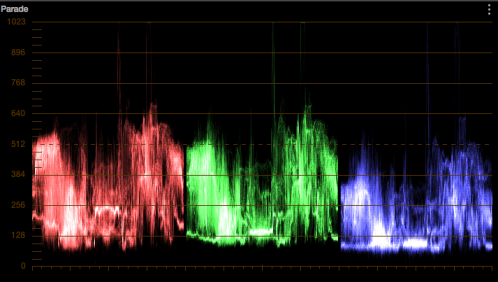 This is the unedited C-Log appearance of the clip (above couple). The lighting was very even so that was good. There is some drama that occurs in this scene with regard to the main character leaving a hotel bar pretty looped.   We had started grading the main character blue each time he was emotionally upset, and this scene needed to reflect that. However, all I had to do was use a single node, adjust the blacks, mids, and highlights to expand the range (see the starting point to the left), then move it toward blue to get the effect. Nothing more was needed. Picture and RGB expanded waveforms shown below are the end result. You can see the blue push that was added in the RGB waveform. This was applied to the entire scene, and thanks to the even nature of the lighting this worked with only a minor adjustment from clip to clip. 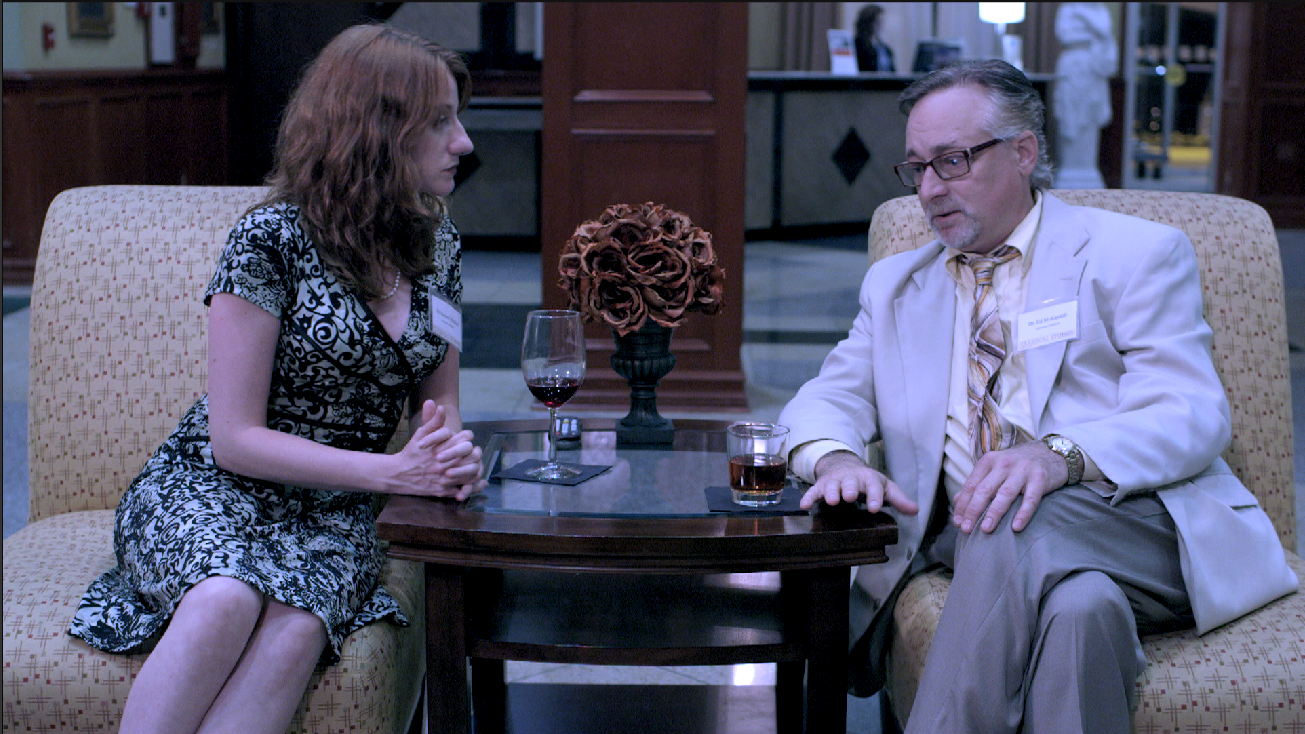 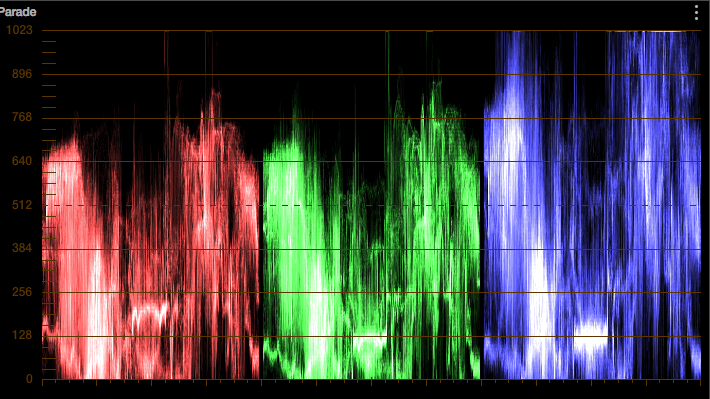 And so it went, moving from scene to scene during the grading process. Once I decided on using the supplied C-Log LUT to Rec.709, I would see if a three-node approach balanced out the highlights properly and brought the right color into the image. If it would not then I would just start over with a single node in Resolve to balance it out then adjust with a second node if necessary to get the ‘look’ we were aiming for for a given emotion in a scene. I was surprised how many times I went from 3+ nodes back to a single node.  So often as not, simple is better.

Lots more to be said but I promised to not reveal too many details about the story. There are more in the IMDB listing.  Miles Doleac is a wonderful director who has a good feel for what he wants in the color grading process, and D.J. Sing, the editor, was a dream to partner with during the grading process.  Kudos to Ben Powell for his consistent and colorful DP work.  This is the first long-form narrative I’ve worked on where the entire editing effort was done in FPCX, and it worked extremely well.  D.J. Sing is amazing. I look forward to seeing this on the big screen, so best of luck to all on the festivals.

Here are few more before and after shots. Can you guess which ones I used the C-Log LUT on and which ones I did not?