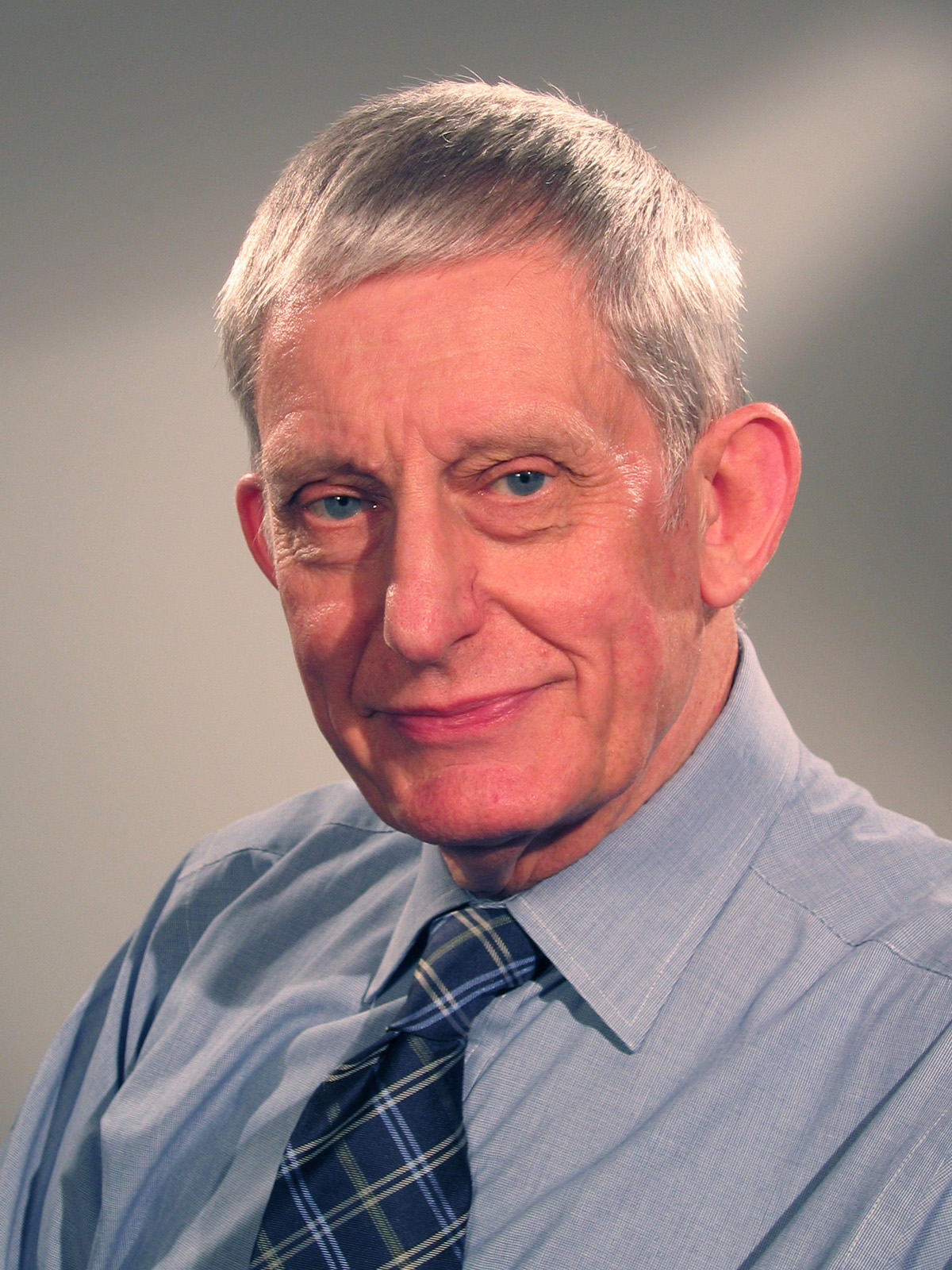 Here are the questions:  Are you using a color test chart on all your shoots? Why not? Have you considered what it’s costing you in post with your colorist who ends up fixing those problems versus using your budget for creative color work? 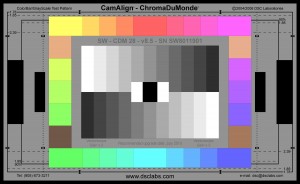 These are questions I’ve been wanting to explore, and with Resolve 11 now supporting automatic color correction with the use of color checker test cards, I thought it would make a lot of sense to talk with David Corley, Founder and President of DSCLabs in Missisauga, Ontario, Canada. They are the most respected company in this area.

My guess is there are two types of people listening to this show right now. A smaller group are you folks in broadcast or high-end studios dealing with multiple cameras and using color charts religiously, or maybe you’re an old-school film DP and your life depends on using a color chart.  But I bet the larger group of you listening may not even know what a color test chart is or why you should use one. Right?

Well, as Art Adams (career DP dude in California) said in a previous interview “How to Use a DSC OneShot Color Reference Card – Raise the Quality of Your Video Productions“:

“Shoot a reference that the colorist can quickly dial in so he/she can spend more time finessing your look and less time trying to do damage control.”

As a colorist using DaVinci Resolve, I see the trouble that filmmakers are constantly getting into with color accuracy, especially when using two or more cameras (GoPros, DSLR combined with higher Sony or RED cameras).  Documentaries are notorious for run-and-gun shooting. But if you’re taking the time to get good audio and using a clapper for sync purposes, it only takes only a couple seconds more to include a color checker card.

There is a painful reality that occurs once the finished video project comes to me. It seems few people truly understand that color accuracy starts with the camera and the lighting issues at capture. Multiple cameras mean multiple issues (read: problems). All too often on lower-budget projects this is simply not addressed, with the hope that it will all be fixed by a colorist.  Yet, if filmmakers commit to a discipline of using a color test chart when they shoot, they don’t have to commit as much money in post for the colorist.

That said, the best person and company I could think of to talk with about color test charts is David Corley, who created DSC Labs. He introduces a wide range of additional reasons why you’ll want to be consistently using a color checker chart in your shoots, and it’s not always about color accuracy!  Hope you find his interview as interesting as I did. Loved his stories (see Special Note below)!

DAVID – welcome to the show!

SPECIAL NOTE FROM TOM: Since this interview, I’ve learned from David that his wife, Susan, is as much the company as he is.

As David wrote later: “While I may be the mouthpiece, Sue is a huge percentage of the company, not only in her management capacity, but also her creativity. I will come up with some idea, and Sue will suggest modifying it to something vastly superior. Without Sue there would be no DSC, and I would be flipping veggieburgers someplace.”

What a sweet couple.  After you read David’s story about how they met, started the company, and hobnobbed with the greats in the film industry, you’ll come to adore them as much as I do.

“About three years after I came to Canada I met Susan Mynott, another UK immigrant.  She was working as a secretary for a doctor at the time, and our family was friends with her aunt and uncle. We fell in love and a year later married.

“I was working with my dad, making TV commercials (he did the business side, I did the production).  We also created a panel show which, while popular, lasted only 22 episodes. I was associate producer and soon learned that the producer just shoots the show; the associate seems to do everything else.

“Sue helped me in this and we had many interesting conversations with celebrities, including Eleanor Roosevelt, pianist Arthur Rubinstein, stripper Gypsy Rose Lee, Jane Russell, catcher Yogi Berra, boxer Archie Moore, Ava Gabor, Paul Newman & Joanne Woodward, Bertrand Russell – philosopher, logician and mathematician, the Duke of Bedford, and many others.

“We had name panels on the desk for the guests, and before one show Arthur Rubinstein took me aside and said, ‘David, in my language [Polish], the way you have spelled my name means toilet. Could you change it?’ I did! 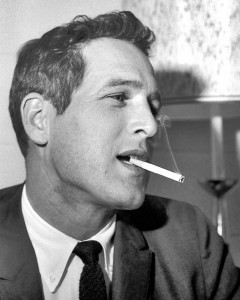 “Sue and I drove a very beaten-up Peugeot, so we rented a smart convertible to pick up the Newmans at the airport.  After taping two shows, we were driving along the 401 to take them to their hotel. Paul, who was sitting next to me in the front, said, ‘Dave, if we have any beer left in the trunk, I’d love one.’ Joanne, who was eight months pregnant and sitting in the back with Sue, said, ‘Oh, I’d love one, too.’  So I stopped at the side of the road and gave them each a bottle of beer.

“There we were, driving along Canada’s busiest highway in a convertible, with two of filmdom’s biggest stars guzzling beer. I almost wanted to be stopped by the police because the publicity would’ve been huge, but I wasn’t.

“When we dropped them at the hotel, Sue asked if there was anything we could bring when we picked them up to take them to the airport the next morning. Joanne said, ‘I would love some fresh orange juice.’  So Sue squeezed some in the morning and we took the juice in a thermos.

“As I handed Paul a cheque for their appearance, he said, ‘We have had so much fun, please give the money to a local university.’ Truth is, we were so broke at the time it was about three years before we eventually did as they wished.

“Ava Gabor was a character. When we picked her up, she said, ‘Where are we having lunch, darling?’ We suggested Winston’s, which had the reputation as being the best restaurant at that time. Ava said, ‘Oh, there are much better restaurants than Winston’s in Toronto. I will show you.’

“By now, Sue and I had four children under six and we lived in a small house in West Toronto.  My dad was tired of producing commercials, and we helped him start an audiovisual rental company, which eventually became very successful and was taken over by my young brother Tony.

“This is when Sue and I, with our fourth child only six weeks old, started DSCLabs. Officially, CFO Sue is also CCBW (Chief Cook and Bottle Washer) and everything in between!  We worked from our basement for five years, then rented 300 feet under a restaurant for three more years, gradually moving up to our present, custom-built, ground source heated/cooled, 15,000-foot building.”

So there you have it. The full story about DSCLabs. Makes me wish I lived closer to them. Would love to share a cup of afternoon tea or a glass of Malbec in the evening to hear more stories!

Back to the future now – take a moment and visit DSCLabs to learn more at
DSCLabs where they have a dozen or so videos posted that talk specifically about “how to use” their test charts. 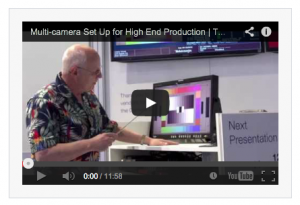 One thought on “Why Use a Video Test Charts? – Interview with David Corley of DSCLabs”