In this episode of Color Talk we dig in deep with Kevin Shaw, Instructor from the International Colorist Academy, about his new class – Advanced Color Grading. We do not talk about the specifics of how you use Resolve or SpeedGrade or the Nucoda color grading system or Baselight. Instead, we delve into Kevin’s particular approach to teaching color grading, which is less about the tools and more about the philosophy of how you think light and color. 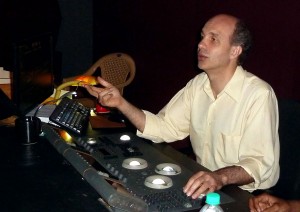 instructor for DaVinci Resolve in the 1990s all the way through 2004. Then he moved back into the chair as a colorist. He’s a busy man, working at the BBC restoration studios and flying around the world on various color-grading projects. Somehow he fits in a few weeks to teach for the International Colorist Academy.  I took his colorist strategies and popular looks classes a few years ago in Los Angeles.

I’m mentioning this because I barely knew Resolve at that time. All I had was a pure love and fascination for color. During class Kevin used a Nucoda Film Master color grader, so I had my doubts about what I was going to learn. I was pleasantly surprised. I have learned well enough how to use DaVinci Resolve over the years, but more importantly I have developed a feel for color and light from the inspiration I felt in Kevin’s classes.

Kevin’s core philosophies around our perception and artistic use of color in films and music videos have impacted every project I’ve done in my career.

Though we cover a lot of territory in our conversation, we barely scratch the surface of what’s possible in Kevin’s live classes.

Kevin generously passed along some gems:

~ Bring up a black-and-white view of an image while grading – thus finding the color you’re missing by using simultaneous color. Bonus – this is helpful for you and your client when you sense your eyes are drifting.

Listen in and learn more! And if you’re in London late January you’ll want to catch Kevin’s course. See this link for more info. As he said in the interview he plans to visit the USA a couple of  times in 2015  (possibly LA and New York). Keep the site for updates. Special thanks to Lily Parish for creating a video version of this podcast with Kevin Shaw.

One Reply to “Teaching Advanced Color Grading: A conversation with Kevin Shaw at the BBC”